Between the months of February and May 2015, you may have noticed a disproportionate number of Facebook and Instagram photos of the United Arab Emirates. If you were paying close attention, you may have noticed that the stars of these images were neither celebrities nor your Middle Eastern friends from college, but Black millennials—a subset of Gen-Y that is arguably invisible. 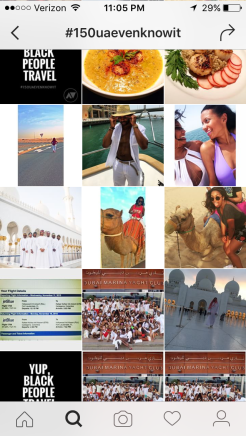 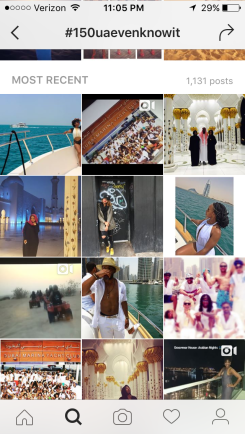 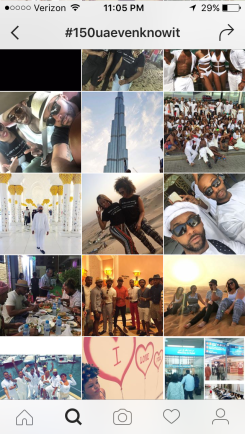 On the morning of Christmas 2015, Etihad Airways had fares to Abu Dhabi listed for as low as $150 from cities such as Washington, DC and New York City. News of the deal spread like wildfire. Before 9am I received a text from two friends about the deal only to check Instagram minutes later to see other friends posting screenshots of their flight confirmations—and the conversation was already well underway on Black Twitter. Needless to say, hundreds of Black millennials—myself included—took advantage of the deal. Later that evening the deal turned out to be a glitch fare that Etihad said it was willing to honor.

Fast forward five months to May 2015: Sheik Zayed Grand Mosque, Dessert Safaris, the Burj Khalifa, and the Arabian Gulf among other notable sites flooded newsfeeds and stories on Snapchat, Instagram, and Facebook as tourists “did it for the gram.” Accompanying these images were two hashtags: #150UAEvenKnowIt and #TravelNoire.

There couldn’t have been a more appropriate hashtag for this literal movement than #150UAEvenKnowIt. The hashtag was born out of a GroupMe conversation of about 150 members. The group coalesced around friends looking to coordinate activities in Abu Dhabi and Dubai. It grew organically through word of mouth as mutual friends added one another to the conversation. Over a five month period, they coordinated visits to the Grand Mosque, desert excursions, several brunch parties, a hotel rooftop open bar, and finally, simultaneous yacht parties in the Arabian/Persian Gulf. 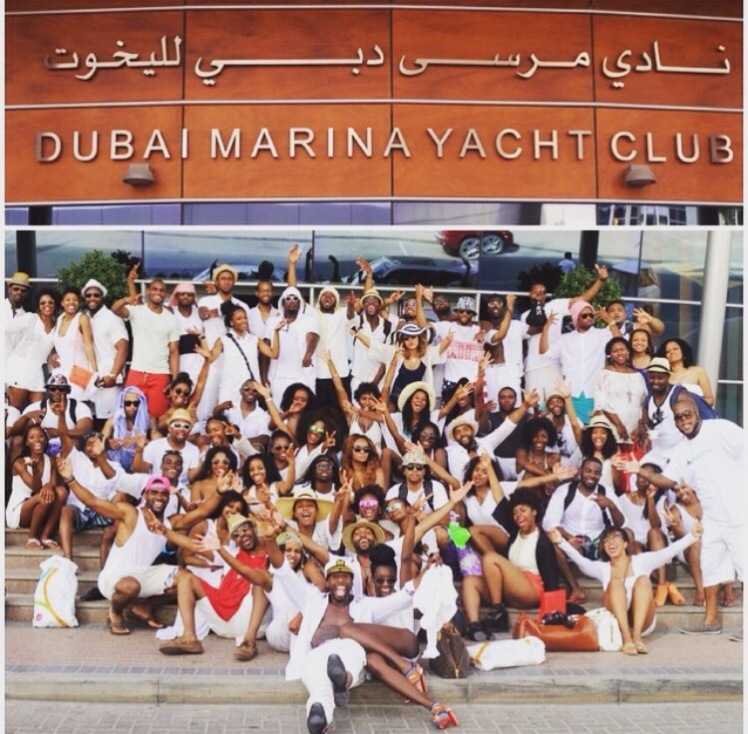 While I wasn’t directly part of the 150 that perhaps neither you nor mainstream America didn’t even know were traveling to the UAE, I must admit its brilliance and significance in American popular culture. For one, it was inspiring to see that 150 strangers with some shared experience could organize and build bonds virtually, especially after being lectured by the elders of the Civil Rights Movement that our generation lacks the ability to organize. More so, this highlighted something that is characteristic of American culture: mainstream America is always catching up on the swift movements of Black America. From Jazz, to Rock & Roll, to Hip-Hop, we have led the trends. Often these big cultural moments happen and the institutions of mainstream America are absent, ignorant, or indifferent. 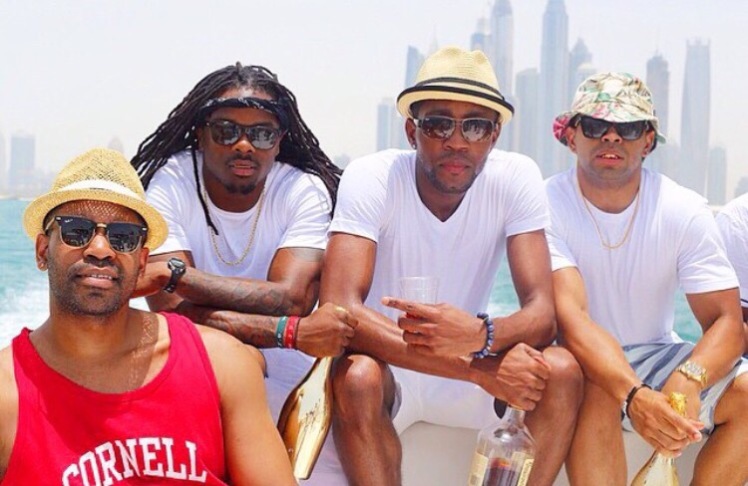 This great migration– or vacation, rather– was an important cultural moment. This was also a marked expression of the social and financial capital of Black Millennials. Numerous studies over the years have referenced the purchasing power of African Americans. Marketers, entertainers, and intellectuals alike have all validated that Black youth set the trends for the general market. Despite the credible sources perpetuating this reality, mainstream media and most brands both fail to recognize this in a substantive way. The flaunting of a cultural immersion in one of the most luxurious travel destinations on the globe was a way for these young travelers to show that they have arrived. 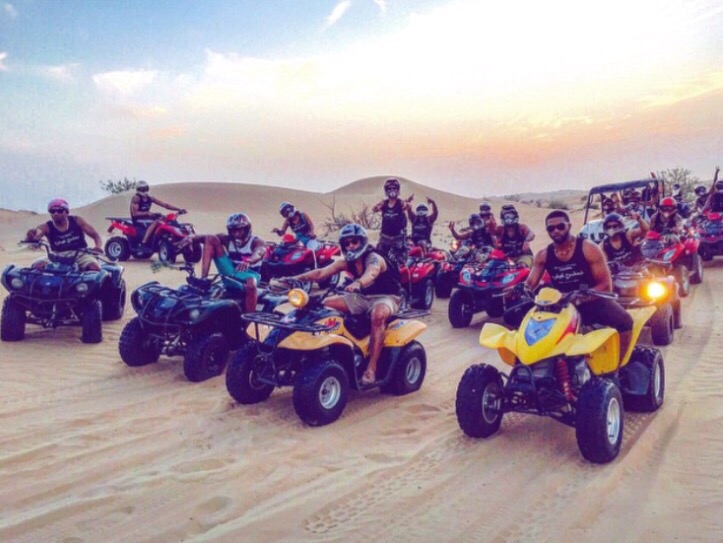 It can be argued that this is in direct response to the undermining of our collective purchasing power, which is evident. With the exception of McDonald’s, select athletic apparel brands, and the occasional stock imagery in advertising, most corporations don’t market to Black consumers. Fashion, luxury, and travel brands easily overlook Black consumers despite the revenue and brand equity that comes from finding favor among Black audiences. Movements like this should serve as a wake up call—to the tourism industry especially—that appealing to Black consumers will be essential to their future success and survival.

Physical capital isn’t the only expression of the collective purchasing power of Black millennials; the social capital of Black millennials surpasses that of any other demographic in the United States. As previously stated, history will show that Black youth often plant the seeds for many of the major trends in American pop culture. Social media has since amplified this. When it comes to popular culture—music, fashion, language, etc.—Black Americans are innovators. When it comes to technology, Black millennials are often early adopters. This union gives Black youth unprecedented influence over modern day culture and current events, as the time it takes for trends to proliferate has shrunk significantly. Black users have fueled the rapid growth of apps such as Twitter, Vine, and GroupMe (the birthplace of #150UAEvenKnowIt). Conversations from “Black Twitter” have even shaped the news cycle in numerous instances over the past two years. It’s absolutely conceivable that Black millennials leverage technology more effectively than many other demographics. Technology has given Black millennials living as minorities in their respective communities a space to congregate.

The great vacation to the Emirates was evidence of the advanced digital competence of Black Millennials. News of the flight deal spread through channels such as Twitter, Instagram, and Facebook. From there, friends slowly started congregating on GroupMe. Through GroupMe, they coordinated various activities and built new connections. During and after their trip, they showcased their newfound affinity for cultural immersion on Instagram for the world to see creating both awe and envy among their audiences. 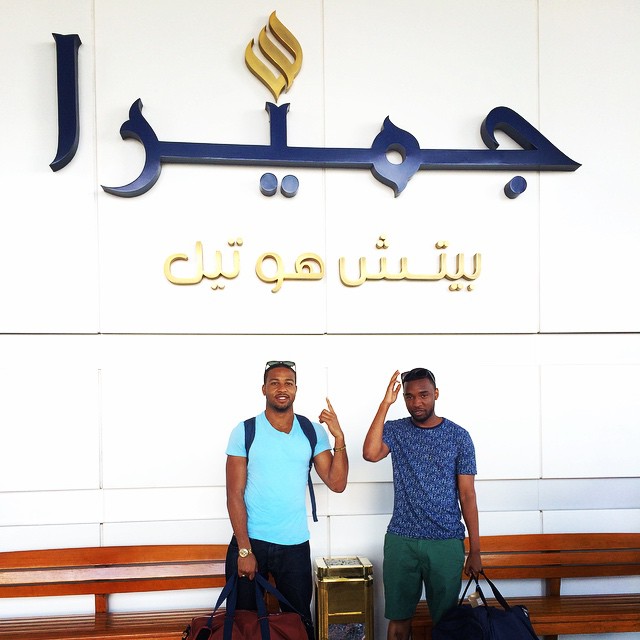 This great vacation was also important because it solidified the acceptance of the travel movement among Black millennials. World travel has seduced the young for generations. However, the growth of visual social platforms–namely Instagram–has added new meaning to travel. Over the past few years, travel has become a coveted status symbol among Black millennials. This was in large part due to a startup known as Travel Noire. Travel Noire is an online community that has turned into a movement over the past two years. The site originated to encourage Black Americans to travel abroad by inspiring and equipping Black millennials with the resources they need to trot the globe. Through user generated content, their Instagram account almost singlehandedly changed the face of foreign travel. Today, not a single Black millennial boards a trip without the thought of taking an image worthy of appearing on Travel Noire’s page.

In a recent episode of Bloomberg’s Masters In Business Podcast, NYU Stern Professor, Scott Galloway affirms that despite all the criticism about millennials, they are the most talented generation America has ever seen. He attributes this to “the [digital] tools they’ve grown up with, the skills they’ve garnered,” and goes on to say that “just some of these kids are exceptional.” Black millennials have made a strong case for his argument. The Great Vacation left us with numerous Travel Noire-worthy images–and we should only expect to see more images like this. More importantly, this movement has rebranded Black millennials in the minds of many and has even started to change the face of travel. The travelers of #150UAEvenKnowIt made quite the statement about their demographic: they are not to be ignored. This vacation was just practice for the future adventures that our generation will embark on–some may not be as glamorous as this, but they will be just as significant. The social capital, purchasing power, organizing ability, and digital competence of Black millennials is not to be taken for granted. The world will hear their voices, recognize their faces, and feel their impact—if they aren’t too busy playing catch up. To again borrow from professor Scott Galloway: “It’s going to be inspiring to see what they’re able to build over the next 10 or 15 years.” 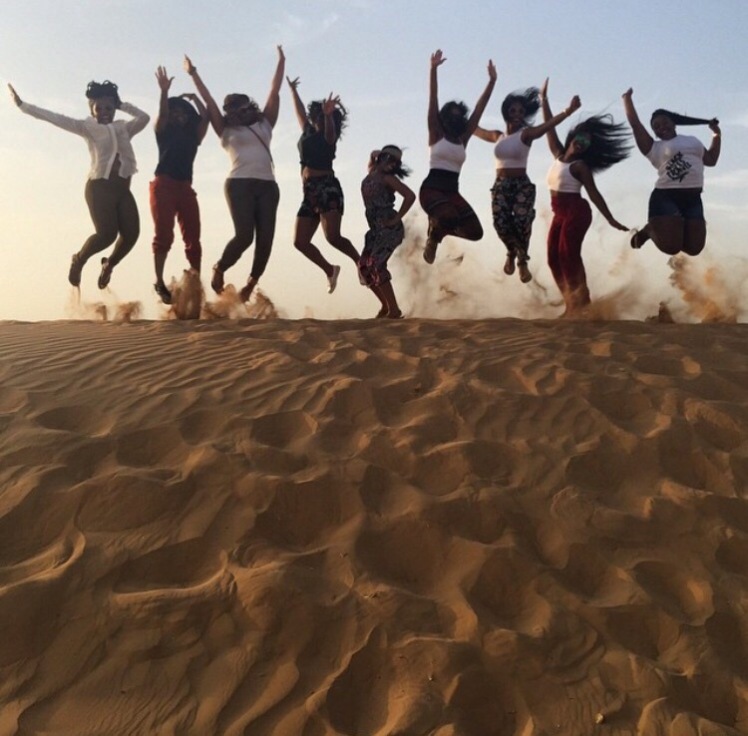 2 thoughts on “#150UAEvenKnowIt: The Birth of the Black Gen-Y Travel Movement”